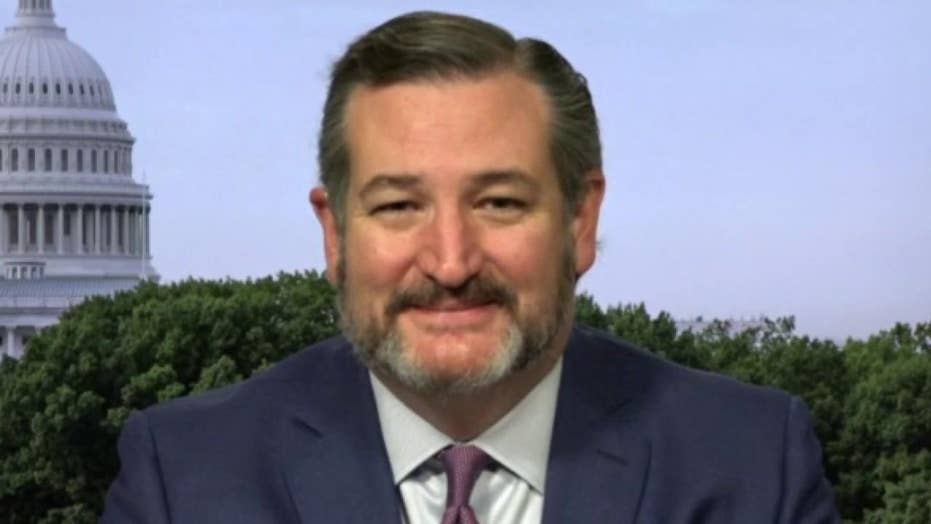 Ted Cruz on Big Tech censorship: Google is 'by far the worst'

President Trump and Republicans blasted Facebook and Twitter for suppressing the social media circulation of a New York Post story on Hunter Biden's emails, with Trump calling for a federal clamp down on the tech giants.

"So terrible that Facebook and Twitter took down the story of “Smoking Gun” emails related to Sleepy Joe Biden and his son, Hunter, in the [New York Post]," Trump tweeted. "It is only the beginning for them. There is nothing worse than a corrupt politician. REPEAL SECTION 230!!!"

Trump was referencing Section 230 of the Communications Decency Act of 1996 that states "no provider or user of an interactive computer service shall be treated as the publisher or speaker of any information provided by another information content provider."

The section has been pivotal in the rise of today's social media giants by allowing not only Internet service providers –­ but also Google, Twitter, Facebook, YouTube and others –­ to be shielded from liability from content posted on their platforms by third parties, in most cases. But some critics on the right feel that tech giants should no longer benefit from protections of Section 230 if they censor conservative viewpoints, including controversial postings by Trump.

"Commentary on or discussion about hacked materials, such as articles that cover them but do not include or link to the materials themselves, aren’t a violation of this policy," Twitter said. "Our policy only covers links to or images of hacked material themselves."

Twitter CEO Jack Dorsey also shared the update and said the company had not done a good enough job of communicating why it took the actions it did.

But Sen. Josh Hawley, R-Mo., said Dorsey's response was "a joke" and he called on the Twitter and Facebook executives to testify under oath before his Senate Judiciary Committee Subcommittee on Crime and Terrorism.

A growing number of GOP lawmakers are demanding answers from Facebook and Twitter, including Hawley, Rep. Jim Jordan, R-Ohio, and Sen. Ted Cruz, R-Texas. They sent letters to one or both of the social media companies decrying the suppression of the Hunter Biden story and questioning whether the tech executives made the decision in cahoots with the Biden presidential campaign.

"If these emails are authentic, they would demonstrate definitively that now-candidate Biden lied when he said in 2016 that he had 'never spoken to [his] son about his overseas business dealings," Cruz wrote in a letter to Twitter's Dorsey.

"Twitter has apparently decided to preemptively censor this report," Cruz continued. "Twitter is not only prohibiting users from sharing this story on their own accounts, it is prohibiting the New York Post itself from posting its own content."

Hawley also requested a formal investigation from the Federal Election Commission (FEC) into possible campaign finance violations, charging that Twitter and Facebook have essentially contributed to the Biden campaign by suppressing a negative story from being circulated.

"Big Tech is trying to steal the election," Gaetz tweeted.

The New York Post released emails that allegedly reveal that Hunter introduced his father, the Democratic presidential nominee, to a top executive at Ukrainian natural gas firm Burisma Holdings at Hunter's request. The article said that the elder Biden met with Vadym Pozharskyi in April 2015 in Washington, D.C.

Meanwhile, Facebook said it was "reducing" the article distribution on its platform.

"While I will intentionally not link to the New York Post, I want be clear that this story is eligible to be fact checked by Facebook's third-party fact checking partners," Facebook spokesperson Andy Stone tweeted Wednesday. "In the meantime, we are reducing its distribution on our platform."

"Four years ago BuzzFeed posted the Steele Dossier, filled with lies and misinformation, and twitter and Facebook happily spread their fake news," Sen. Mike Lee, R-Utah, said of the anti-President Trump document. "Now these platforms are blocking transmission of a New York Post story critical of a Democrat. The hypocrisy is not sustainable."

The Biden campaign said the former vice president engaged in "no wrongdoing" and the alleged meeting never took place.

"Investigations by the press, during impeachment, and even by two Republican-led Senate committees whose work was decried as 'not legitimate' and political by a GOP colleague have all reached the same conclusion: that Joe Biden carried out official U.S. policy toward Ukraine and engaged in no wrongdoing," Biden campaign spokesman Andrew Bates said. "Trump Administration officials have attested to these facts under oath."

Bates added: "Moreover, we have reviewed Joe Biden's official schedules from the time and no meeting, as alleged by the New York Post, ever took place."